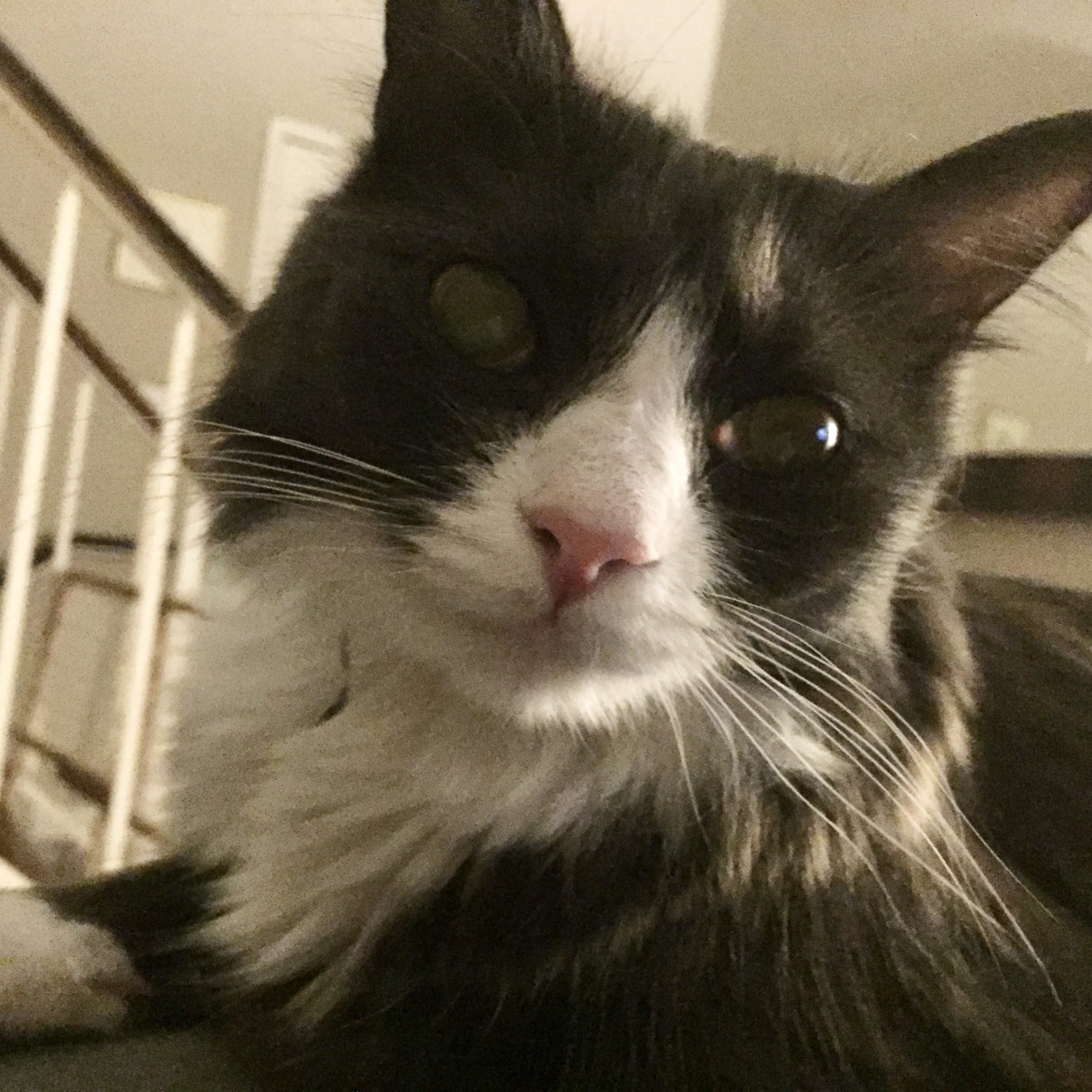 And Now a Word about Cats

Don’t you train dogs? Yes, but I also do cat consults, which I find is not common among trainers. Dogs often live with cats, and cats can have behavioral issues, and they can also be trained. Most of my calls are about cat-and-dog introductions and their getting along, but I also get quite a few calls about litter boxes!

We expect good behavior from dogs, but the behavior bar with cats can be extraordinarily high. We often ask way too much of our cats concerning litter boxes. We don’t ask dogs to pee by climbing into a motorized, covered box in a dark corner of the basement, nor do we challenge ourselves so much just to pee.

If your cat is having litter box issues, usually it is your fault. Cats are natural box users, so what have you done to alter the situation? Changed their litter suddenly because you didn’t like the one being used–sometimes used for years? If it ain’t broke, don’t fix it–or fix it gradually. Why would Simba be drawn to a box that makes a grinding noise as it rakes the litter under him? Some cats don’t even want a lid on their box. If it ain’t broke, don’t fix it. Cats are notoriously bad at change. Is the box large enough? Get the biggest you can find!

How many cats do you have? Experts say you usually need one box per cat and sometimes an additional box–so three cats equals four boxes. I have had up to four cats and only needed two litter boxes, but I have pretty easy-going kitties. If you have more than one cat and the “bathroom” is occupied, where do you expect the other cat to go? If you have more than one level to your home, you will probably want a litter box on each level–just like a human bathroom. They don’t want to take two flights of stairs to the dank basement to pee; would you? When you gotta go, you gotta go. Cats also prefer if possible to have more than one exit to the room where the cat box is or they can feel trapped.

Is your cat particularly fastidious? Mine don’t care if I ever scoop the poop, but some will not get in the box if has been soiled. Some also hate the litter you have chosen and will perch on the edges of the box to avoid hard nuggets of litter under their paws and often miss the box. I prefer biodegradable litters myself, and my cats are cool about that.

I’m always surprised by people who don’t have cats simply “because of the litter box.” So many people tell me that! Compared to dogs peeing on every hedge and our using bags to handle poop, cats are so low maintenance. Sometimes a mat near the box will collect excess litter. My litter boxes are in the shower stall and tub for easier containment and cleanup, and I just change the boxes weekly. Simple.

Still having issues? Time for a vet visit. Urinary tract infections and other medical issues can send a cat to pee outside the box. You might also add a pheromone diffuser in an outlet: some cats feel more relaxed with a synthetic version of a mother cat’s pheromones in the air. BUT DANGEROUS IF YOU KEEP BIRDS.

Is your cat indoor/outdoor and mostly using the neighbor’s bushes as a litter box? First, GET YOUR CAT INSIDE! She will live many years longer, not carry fleas into your house, and avoid so many health and behavior issues. She cries to go out? I don’t care. Call me and we will adjust her behavior. Or build a catio. Second, your neighbor is not happy.

How do you keep your dog out of the litter box? If your dog is bigger than your kitty, you can limit access to the litter box room with a baby gate or just by attaching a cord from the door frame to the door so there is only a space to enter that is too narrow for the dog. If your cats and dogs are similar in size, you may have to use my bathtub technique or use a baby gate–which isn’t popular always with senior kit-cats. Be creative! You’re right that cat poop is a tempting but unhealthy appetizer for dogs. And if your dog is a frequent visitor, your cat will shun the box.

If you’re not allergic, and don’t have a cat, you should! You are SO MISSING OUT! Actually, you should get two because most cats prefer a feline companion, and there are so many who need homes anyhow. The last research I saw in Los Angeles County said that only twenty percent of cats make it out of shelters–the rest are killed because there are “too many,” even kittens. I may be a trainer primarily for dogs, but I LOVE LOVE LOVE living with cats. They are the best! Oh, and if you are allergic, you might be able to adjust to your own cat’s allergens–many people do.

Want to know how to introduce cats and dogs? I think that’s another post! (As I wrote this, my lap has been warmed by Chloe the Magnificent. Just sayin.)